We jumped on US212 this morning with our sights set on Hermosa, SD.  212 is a very pleasant 2-lane type road.  More rolling green hills today, and relatively speaking – abundant wildlife in South Dakota.

It was a double-warp day – into Wyoming, then South Dakota.  As far as the abundant wildlife – we saw many pronghorn antelope, and later in the evening several deer – including a close encounter of the truck kind.

With a relatively early (for us) start at 0845 hrs., we pulled into our new campground (which resembles an RV parking lot alongside the road) at 1500 hrs.  It was in the low 90’s, humid, and little wind.

Both of us were feeling the effects of the heat, so we decided to keep it gentle this afternoon.  It was also time to do some laundry or consider doing the rest of the trip commando with our dirty clothes hidden out of sight.  Our new refrigerator is a high maintenance little princess.  We switched out the cooling units as many of them had melted.  A neat discovery we are trying out is using the freezer compartments of the recently deceased refrigerator as cooling chests.  We use ice in them, and they are very well insulated.

Our diet has changed for a couple days due to the demise of the fridge.  We are temporarily doing high protein and unusual combinations.  Dinner tonight was really good – mixed bean soup with caribou chorizo – super tasty.  Tomorrow is looking like salmon or steak, with pork tenderloin and Conecuh sausage waiting in the wings.

Our campground information contained details about a nightly lighting ceremony at Mount Rushmore, and after reading some reviews, we decided it was worth the time to go see it.  The campground brochure listed times as 2115 to 2300 hrs., and the NPS website listed the start time as 2100 hrs.  We decided to err on the side of caution, and left in time to arrive at 2100 hrs.  On our drive over, we were admiring the scenery when the scenery started moving….a deer ran out in front of us – Bill was able to get the truck stopped and only bumped the deer – it ran off and rejoined it’s herd.  No harm to the truck and our heart rates slowed by the time we reached the park.

We parked at 2059 hrs., and the program was already underway – but not by much.  They were just starting to talk about Washington.  The NPS website mentioned a 20-minute ranger talk, patriotic music, veteran’s salute, and lowering of the flag.  What we encountered was a 5-minute brief talk about the 4 presidents on Rushmore, sang the National Anthem while a flag folding ceremony took place, they flipped the switch so the monument was lighted, and thanked everyone for coming.  Whole thing took maybe 8 minutes!  It took longer to figure out using the pay station to pay for parking – apparently an “annual pass” – although there was no one to confirm that with.  Fortunately, there was a young man – park attendant (although he didn’t look old enough to be in junior high) – that helped us with the pay station.  The drive back to the campground was a little slower and more watchful – and we saw more deer. 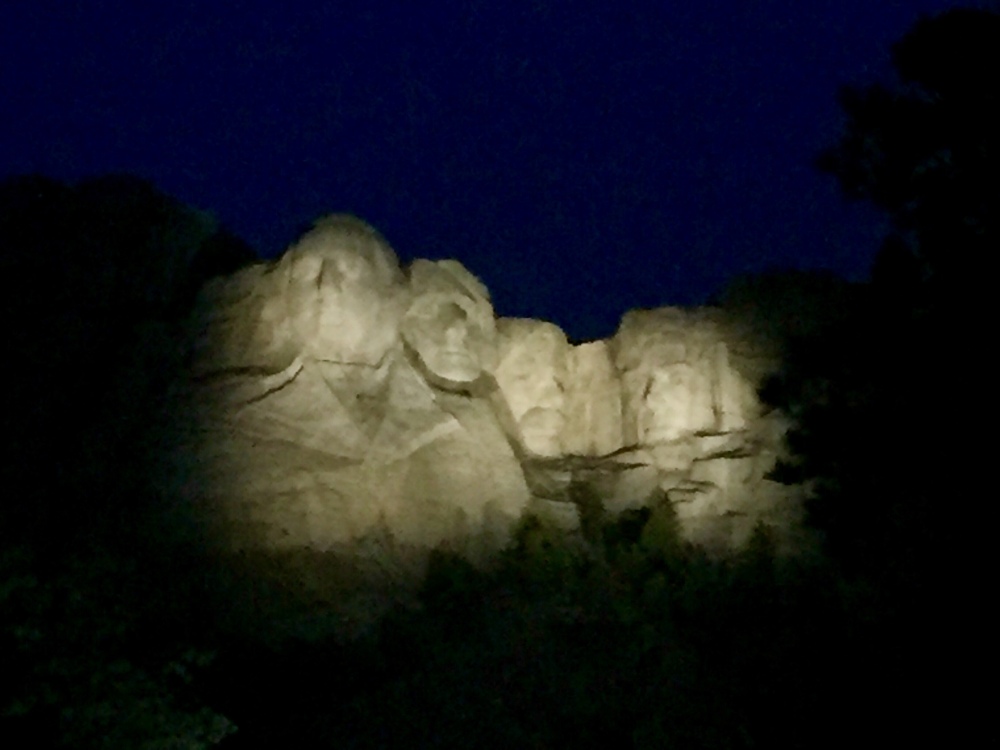 We will be here until Tuesday morning – planning on doing more exploring and touristing.  But first, sleep – and hoping for a cool down in temperatures!