Knowing that today would be a relatively short day, we left at 1025 hrs. – in between thunderstorms.  The temps were predicted to be about 15 degrees cooler – sweet relief!  We stopped for refueling – both the truck and our hungry tummies – and this was the picture from the rear:

Unfortunately, we did not stay ahead of this system!  It was a rainy, wet, windy drive.  It was maybe the second or third day of this trip that we had to drive in inclement weather.  We warped into Wisconsin at 1145 hrs. across the Mississippi River.

We arrived in Oshkosh around 1500hrs. and got in line for camping registration.  The line was at least a mile long.  We noticed that there wasn’t much movement on the campground/open field with campers.  There were many already in and set up – far more than there have been in the past on Saturday.  Progress was painfully slow – Bill was guestimating that we might get to check in around 1700 hrs.  He is such an optimist!  We finally made our way to the front of the line around 1745 hrs., then ended up sitting there for another half hour.  It was apparent that only tenters were being allowed into the grounds.  They might have considered letting us camp if we had a houseboat…there were many “lakes” where there should have been camping spots.  We were shuttled through the grounds and off on a county side road – and told that this is where we would park for at least one night, and maybe more! 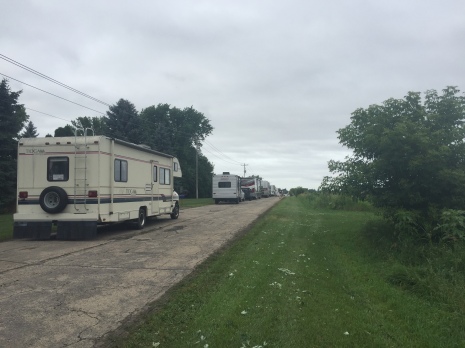 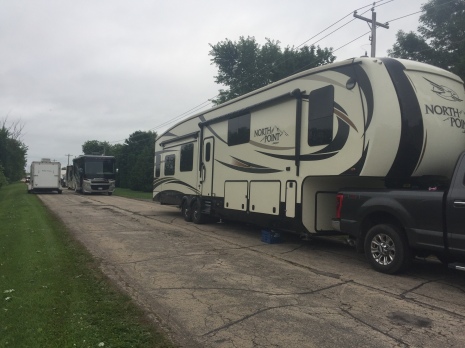 This was a first for us.  We haven’t used a Walmart parking lot yet – but the Walmart here in Oshkosh doesn’t allow overnight parking.  We have NEVER, and never expected to be parking along a road – a relatively narrow two-lane road between a farmer’s field and houses!  We have our slides half way out – can’t put them all the way out.  Can’t put our steps all the way out.  Opening our door is an adventure – to see whether or not there is oncoming traffic.  The road remains open to two-way traffic.  In need of steps and mileage, I went for a walk to count rigs.  There were a couple other roads being used for camping as well.  There are 80 units on our road, plus about 30 on another road.  We also discovered that the road leading into the campground check-in has been turned into a temporary campground as well.

Aircraft camping has also been suspended unless you have a reservation on the hard/asphalt surface of the campground.  Sploshkosh has returned with a vengeance!  We did a Walmart run last night so that when we finally get in, we won’t have to drive in and out through the mud.  Tried to restock beer for Bill – but Wisconsin doesn’t sell alcohol (including beer and wine) after 2100 hrs. and before 0800 hrs.

There is a “rockfest” going on across Highway 41 within a mile of our “campground”.  We were lulled to sleep last night by the thudding beat, loud sounds, and inaudible lyrics of “Rockfest”.  Can’t wait to see what Sunday brings!

This will likely be our last blog for the next week – internet connectivity usually doesn’t last beyond Monday morning before it is overloaded.  See you all when we are back on the road!